Footprints on the Sand by Dr. M. Azizur Rahman has been displayed at the prestigious Frankfurt Book Fair, Germany.

It’s the greatest pleasure of Uttara University family to announce that one of the books written by our Vice Chancellor namely Footprints on the Sand was displayed at prestigious Frankfurt Book Fair (Since 1933), Germany from 19-23 October 2016 at the USA Pavilion.  We congratulate our VC Sir for this occasion as well as for having this award. [You may view an electronic copy of the catalog at:

END_OF_DOCUMENT_TOKEN_TO_BE_REPLACED

The contribution of Angus Deaton in consumption, poverty and welfare 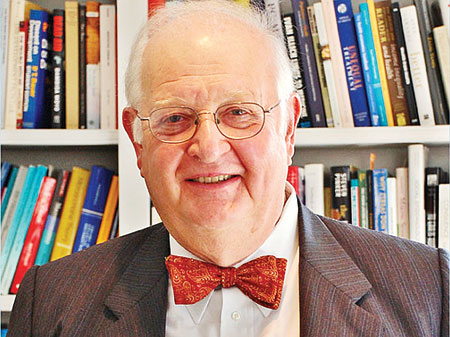 Angus Deaton, Professor of Economics and International Affairs at Princeton University, has recently been awarded Nobel Prize in Economic Sciences in 2015. He is in receipt of the Nobel Prize for his analysis of consumption, poverty and welfare which is given the new focus on income inequality. Deaton was born in Scotland and holds American and British dual citizenship.
Angus Deaton has made a lot of contributions to the theory and measurement of the three fields. These fields include consumption demand systems, the fluctuation of consumption over time, and the measurement of consumption and poverty in the developing world. He has written a major book in each field to share his deep insights. The aim of these three books and the research is to have served as “door-openers”. Each setting has a clear agenda for which his subsequent research has greatly been applied. Though the three fields are quite different, Deaton’s research on them shares the same general themes which have a long lasting influence on the modern macro-economic research.
When Deaton worked with the World Bank, he played an important role in expanding data in the developing countries. He also brought a good deal of methodological individualism to the field of consumption studies. He worked most of all by using household surveys more than macroeconomic data. He worked extensively from the bottom up. His measuring the welfare sounds very simple but doing it on a right way is not as easy as we think. He consistently tried to apply theory and data closer together through his mastery of measurement and statistical methods. He also focused on the analysis of individual and aggregate outcomes closer together by attending to the issues of aggregation. In fact, a few scholars got themselves involved such a diverse set of methods in their own research. It helped us better understand the determinants of consumption as well as human welfare in particular.
Deaton looks more closely at what the poor households consume to get a better sense of their standard of livings and possible ways for the economic development. He deeply understands economic growth, the benefits of modernity and political economy and those of implications in general.
Deaton has had long a special working relationship with India and South Africa. He has worked on how to measure poverty globally in a consistent manner and ways and means forward. According to Angus Deaton, there are tremendous health problems in India including those of adults and children. Half of the children in India are still malnourished. There also have been a lot of progresses indeed in India. Still then, we have a lot of good things to do in front of us. He has done the detailed research work with household-level data-sets in the poor countries including India and South Africa so that anyone can understand the effects of changes in policies. There are a lot more poor people in rural areas of India. These areas have been affected with India’s subsidy system for the poor which allows them to buy the things of necessities. He also has written on gender discrimination within the family in the developing nations. The absence of state capacity is one of the major causes of poverty and deprivation around the world. Without effective states working with active and involved citizens, there is a little chance for the growth that is needed to abolish the global poverty.
In the book entitled The Great Escape (2013), Deaton expressed uncertainty about the effectiveness of international aid. China and India have upraised tens of millions of people living below the poverty line despite receiving relatively little foreign aid. At the same time, many African countries have remained to mire in poverty in spite of getting substantial foreign aid. In reality, we don’t have these ready-made solutions and money is not going to be the answer to many things. Rather, foreign aid increases corruption in the poor countries’ government system in general. It means that based on the foreign aid, we can’t move ahead fast. Thus, he has been known as one of the main critics of the foreign aid. We have to use our own available properties, resources as well as assets to move fast. Indeed, the foreign aid does not reach to the poor people at all.
Deaton has introduced to us about “Almost Ideal Demand System” which is a standard tool of governments’ use to study how a change has occurred in economic policy. For example: an increase in sales taxes on food will show how it will affect the different social groups and how large the gains or losses will be.
However, the committee of Nobel Prize has noted that Deaton’s work concentrates on around three questions. These are included as follows:
l How do consumers distribute their spending among different goods?
l How much of society’s income is spent, and how much is saved?
l How do we best measure and analyze welfare and poverty?
In order to bring and distribute the social welfare and to alleviate the poverty, we must study and assume the propensity of consumption in the personal level. The study of consumption leads naturally to the study of savings as well as consumption in the future period. We know about Keynes’s famous propensity to the consummation theory which tells us that consumption is a fraction of current income. Milton Friedman’s permanent income hypothesis tells us that consumption is a fraction of estimated lifetime income. Otherwise, Modigliani’s Life Cycle Hypothesis focuses on “borrow when young, save when middle-aged and dissave when old.” Deaton played a significant role in finding out a new dimension of theories.
Actually, Deaton is the economist of the economists. So, the Nobel price of 2015 in Economics for Angus Deaton’s great achievement of consumption, poverty, and welfare is undoubtedly a brilliant selection.
Dr M Azizur Rahman is a Vice-Chancellor, Uttara University

South Asia in the grip of trafficking

Among the non-Capitalism only Socialism and the Communism will be
discussed in this article. In terms of population almost every country is large.
Many countries have geographically broad population. Different people have
different mind, brain and thinking. Naturally two individuals may be thinking in
a two different ways. We cannot expect the large and broad population will
have rigid or inflexible thinking. Naturally population will be diverse with
flexible thought and thinking. Once again, people do not live with inflexible and
rigid idea. Therefore, it is not very easy to maintain a common goal or set of
laws and order, rules and regulation for sharing effort and resources in the
society of any size under communism. According to the source of Google, large
and diversified societies tend to graviate towards the system of hierarchy which
is far from the ethics of fair distribution of work, income, national income and
resources. This tendency in a large society is very common which can
destabilize a communistic society.

END_OF_DOCUMENT_TOKEN_TO_BE_REPLACED

All the human beings are assumed to be rational. They are brought up in the
family under the close care of their parents. Parents do not intend to make a
difference in rearing, bearing and caring between their children. However, in
many conservative societies such as there in Indo-Pak-Bangladesh sub-
continent, the parents are relatively more careful about bringing up their boys
compared to their girls. Normally, the girls get married at the point of crossing
their teenage or they are virtually sold out in the marriage market. In the
Western society such a discrimination between boys and girls are, however, not
very normal. Even the inherited assets and properties are equitable between the
sex in the less than conservative society. From the Islamic point of view, a girl
usually inherits the half of what a boy is blessed. As is normally thought, every
of us wishes to be a big man with a good name and fame in the society. How are
all these make a difference between the human? There are many more factors
than can be precisely briefed in this small space of writing..

END_OF_DOCUMENT_TOKEN_TO_BE_REPLACED

People are social being. They must be able to make a difference between good
and bad. However, everybody are not equally good or equally bad. Some are
better than others. Others are worse than some other. All it means that human
being can also behave like animal. It is our social responsibility to aware the
good people and to negatively sanction or punish the bad people. However, we
cannot arbitrarily punish people. Higher offence receives higher punishment as
it requires an expensive defense. Similarly, lower offence is accompanied by
little punishment. All it means, the crimes and punishment vary from zero (0) to
infinite (). This requires us to frame rules and regulation of various degrees for
different kinds of crime. The highest form of rules and regulations are called
law. The commonness of punishment for the common offence as is found as the
precedent is called common law.

END_OF_DOCUMENT_TOKEN_TO_BE_REPLACED

Bureaucracy is a complicated official system which is both necessary and
annoying. Bureaucracy is the system of governmental management. Without
bureaucracy we cannot run the Government. Bureaucracy is annoying and
confusing because it has a lot of rules, regulation and process. All these can
easily serve as a source of red-tap or red-tapism. Bureaucrats work in the system
of bureaucracy and make use of official rules very strictly. Bureaucrats are not
elected individuals. Only the politicians are elected by the vote of general
people in the national election for a specific period of time. Bureaucrats are not
replaced during their tenureship. Bureaucrats continue to perform for the tenure
of their job unless they are separated for any exceptional reason.